How to Make a Music Studio in Your Room 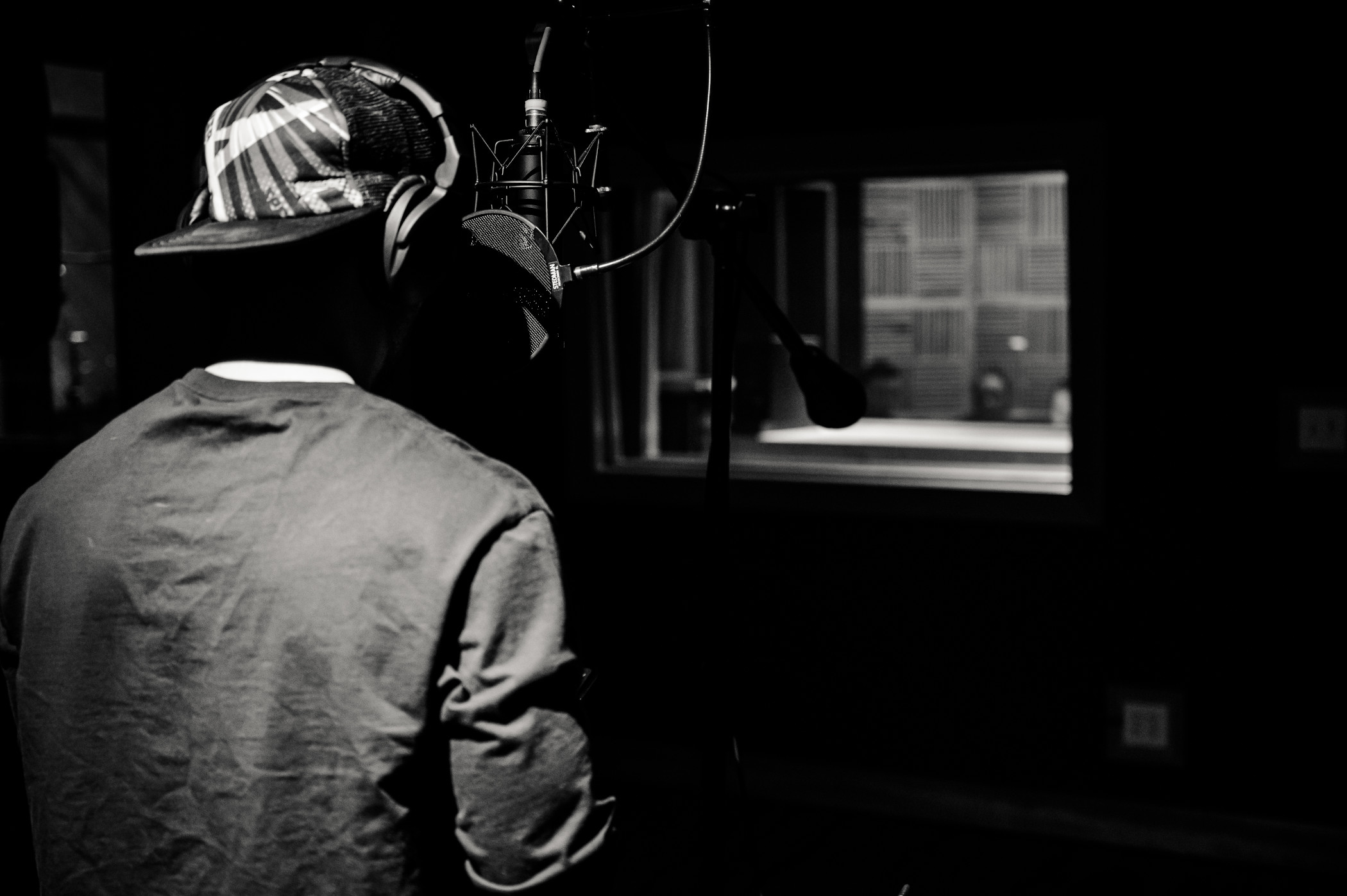 How to make a music studio in your room is a skill every modern musician should know. That's because making a music studio lets artists record better anywhere they are! With today's technology, everything from a phone to a desktop computer can operate as a DAW, so it's a good move to learn how to make any room a studio.

Can any room be a studio, though? Yes! And we're going to learn how right now. Let's go.

How to Make a Music Studio with Proper Gear

If you need to buy some things, or if you just want to work with better stuff, we have lists of recommendations ready for you. Better yet, they're all geared towards costing as little as possible. Most of these products cost less than a hundred dollars, and there are options around 30 bucks for each category.

Once you've got all that covered, we can move on to setting up a music studio in your room.

When you're recording, you need to have good headphones. That means you can do your mixing with those headphones. But most people also have speakers they like to mix out of. That's def a pro move because your listeners aren't going to be in great headphones most of the time. They'll be in earbuds and car stereos, etc. That's why it's always best to mix with good speakers and headphones so you can cross-reference your mix to find that perfect sound.

(Protip: the car-stereo test is a time-honored tradition. Put your mix on your car stereo and drive around listening to that. It's the ultimate deciding factor. Lots of times producers will mix a tape down in the studio only to hate the product after the fact when they hear it in the car. Uber-bummer).

If you're going to use speakers, you need to have them placed properly or you won't hear them right.

See the image above for where your mains go. It's not complex. You're good.

[Are we helping? You should see us distro music. You can put your single in stores for just 9 USD now.]

How to make a music studio in your room includes using acoustics to dampen sounds you don't want. This is the brilliant (and fun) part about getting great recordings. At an amphitheater, the music space is designed to amplify sound so the audience can hear well. In a studio, it's the opposite: all the sounds are muffled so only the musician goes on the recording.

Set Up a Music Studio with a Pop Screen

First, you need a pop screen on your mic (see above). They take sharp snapping sounds out of vocalists' rapping and singing. They aren't expensive, but you can make one, too. Some people think the foam cover on your mic is enough. That's called a wind screen, and it will affect your high freqs in the studio. It also won't help against blasts of air the way pop filters do.

That's the easiest thing. But now you gotta make a music studio with proper acoustics, and that's going to either be easy or much more complicated, depending on how good a job you want to do.

Make a Home Recording Studio in the Right Room

Make a recording studio in a room with hard floors like tile, concrete, or hardwood. Carpet eats high freq sounds but not bass ones. That means your recordings will be off first, then your mix will be off later if you do it with speakers. You can use a rug for drums if you record them at some point. Upstairs rooms make more noise from footsteps, so stay downstairs if you can.

If you're recording rap or hip hop, or even singing which isn't too loud, the easiest move you can make is to skip dampening the whole room and just isolate the vocalist. Put your rapper's back to the corner of the room. Face the mic towards the artist so its back faces the rest of the room. Then put an isolation shield between the mic and the room (seen above). They're like forty or fifty bucks and they work wonders. We recommend this one.

Your acoustics won't be any better when you're mixing, but working inside headphones fixes that, too. Easy peasy.

But what if you really want to do it right? Then you're gonna need to get much more serious and dampen the whole studio.

Oh, late thought: you can also throw your vocalist into the closet with lots of hanging clothes, or even just under a blanket, but it does tend to dampen their mood as well as their sound.

How to make a music studio in your room with real acoustics gets heavy, but we'll chill it out for you, npnp.

Our mission here is to stop sounds from bouncing around. When they get "loose" and start bouncing, you get echoes in your mix. Each echo from each wall bounces like a ricocheting bullet and eventually reaches the mic. That's the mic's job, after all. It collects sound. It's good at it.

These echoes build up in there and when you listen to your recording, it's what producers call "muddy." It's unclear. Basically, it doesn't sound professional, especially with the volume up.

How to fix that? The absolute easiest thing you can do is chuck a bunch of pillows and beanbag chairs in your studio. That's gonna kill a ton of that bouncing sound right there. A couch is great, too. Every bouncing sound that hits those cushions will stop.

Any and all furniture in your bedroom -- ahem! I mean, your studio -- should have a cloth over it. Thicker is better. Got a little table? Put a blanket over it. Got a desk? Drape some cloth over it. A stool for guitarists to sit on? Blanket. Get creative! Doesn't have to look stupid.

After that we get even more serious and deal with the bass.

How to Make a Recording Studio at Home with Bass Traps

How to make a recording studio at home with real sound dampening will live and die on its ability to stop bass. Bass has long, straight wavelengths which pass through anything even kinda thin. Carpet, blankets, drywall, wood floors ... it cuts through it all. If you didn't go for our cheap-n-easy method described above, you're in for some work. We'll keep your costs low, though.

We'll outsource our first bass lesson to the School of VoiceOver because they work with vocals only, and lots of today's artists just record vocals and make beats and music in the computer.

School of VoiceOver says: Sound is like continuously dropping rocks into the pond—a continuous source of ripples heading for the walls. But a room is not a flat pond. Each corner has THREE flat surfaces sending ripples to it—two walls and the ceiling for upper corners, or two walls and the floor for lower corners. Of all acoustic frequencies from high to low, the lowest frequencies (bass) behave the most like the waves in the pond. So corners of rooms tend to “pool” bass frequencies in them, where all the ripples are bumping into each other. And because lower frequencies have longer wavelengths, thin wave dampeners have less effect. You need THICKER material to affect bass frequencies.

The easiest thing you can do is buy bass traps just for the corners. The corners cause the biggest trouble. You can make them, too, but if you're only going to do the corners, you should really buy top-quality stuff. It's relatively affordable.

What you should really do, though, is make or buy traps for each entire corner in your studio, floor to ceiling. See the above image for what that looks like. There are loads and loads of DIY plans for making your own traps, but they're all a lot of work. Traps are expensive, though, so making them might be your best bet.

Once you tackle the bass, you've still got the rest of the room to deal with.

(That isolation shield is starting to look pretty good, innit)?

How to make a music studio in your room will ultimately come down to placing a choice amount of sonic stoppers in the right places. You can make these yourself, too, but when you can get real acoustic foam for 40 bucks for 48 pieces, you're probably going to pay as much to make them as you would to buy them.

Once you figure that out, it's time for some physics. There's a really cool science trick called "the mirror trick." Guess what it uses? Good job.

Pretend you're going to soundproof for mixing at your DAW with speakers. What you do is, you sit where you'll be mixing. Have a friend go to the wall on your right with a mirror and a pencil. The mirror should be facing you.

Your buddy scoots slowly along the wall and you swivel to watch that mirror. Every time you see one of your speakers in the reflection, have your friend mark the wall with the pencil. Go all around the room this way.

Once that's done, put sound stoppers on the wall behind your speakers, and in front of your speakers (behind you). Do these areas above, below, and at ear level if you can. Also put some above your speakers hanging from the ceiling.

If you bought all sorts of foam, don't cover more than half of any wall with foam.

If you know how to make a home music studio, not only will you never need to pay -- you might actually get paid to record your friends! How much money can you make with a music studio in your room? Depends on how much work you do in there, but PayScale says they make an average of about 22 USD an hour. Not bad for having all kinds of fun without even leaving the bedroom, amirite?

Thanks for reading, good luck in there, and remember to provide drinks for your artists! Sound dampening makes studios real hot.