The Best Earbuds for Recording Under 100 Dollars 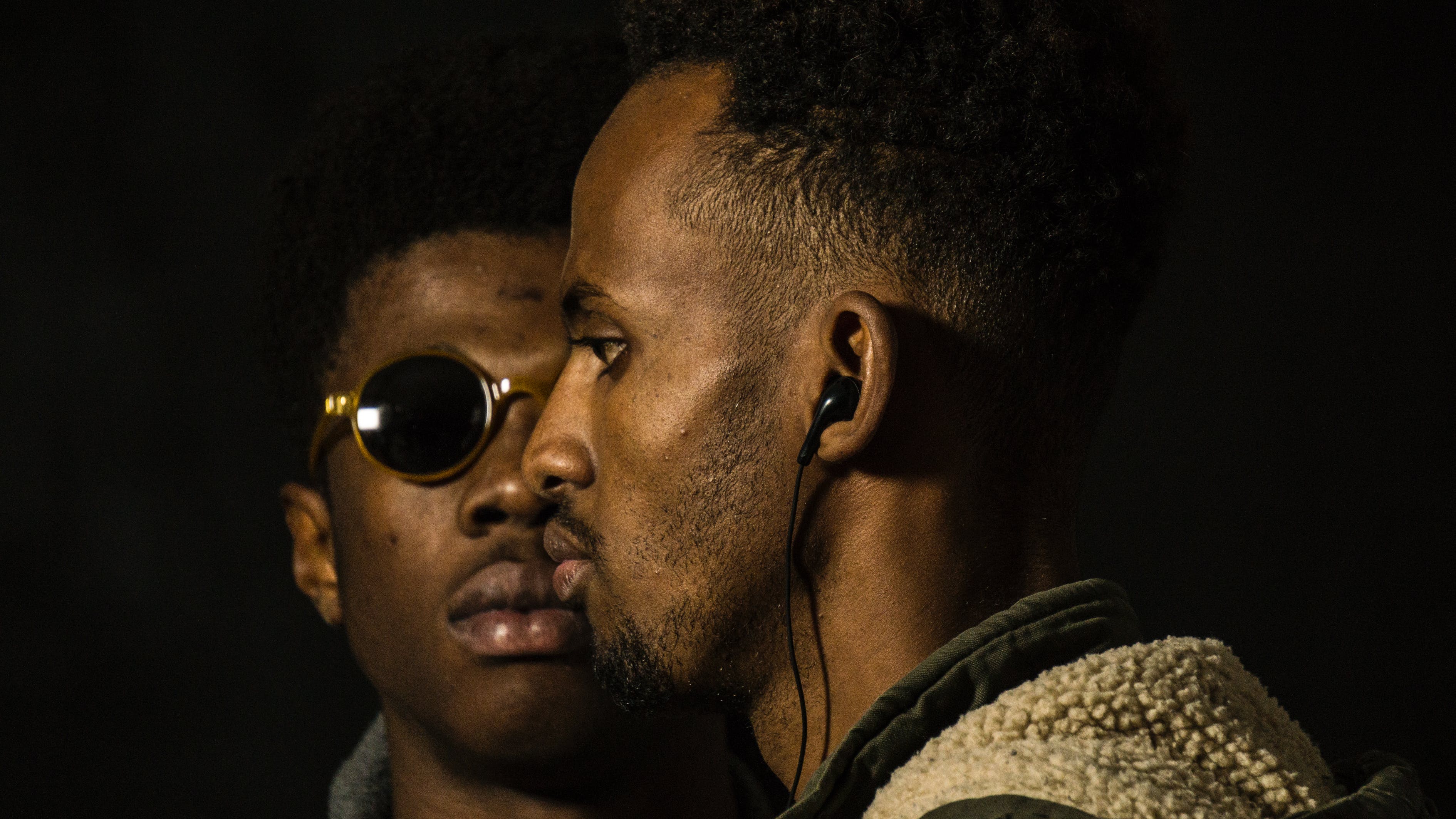 The best earbuds for recording rap and hip hop can be hard to find, but lots of rappers need to know. Why just rappers? Mostly because rap vocals can be delivered at a typical speaking volume with moderate variation, and because even if they distort a little, it still sounds pretty cool -- maybe even better.

Even so, it’s a fact that earbuds won't do as good a job as a dedicated mic and closed-back headphones (we covered microphones here and headphones here). But it’s also a fact that rappers often use their smartphones as a mobile studio.

"What? You can't use your smartphone as a studio."

Oh, yes you can. Hip-hop producer Steve Lacy works exclusively on his phone. Dolby Sound secretly made an app which records pro-quality tracks last year. Android has had more than 10 mobile studio apps for a long time. And there are plenty more.

So you can do it, but you’ll want earbuds which will do the best job for your money. The best earbuds for recording haven't been listed anywhere online until now, so we're going to work that out for you.

First, we need to talk about what we’re looking for.

The best earbuds for recording all have one thing in common: itty-bitty holes to let sound in. That hole (and the mic behind it) is usually on the wire somewhere around your collar instead of up near your mouth. Closer to your mouth is better.

Either way, though, the mic is going to twist and turn when you walk, so designers use an omnidirectional mic instead of a directional one. That means earbud mics pick up sound from all around you, and that’s not good. What we’re getting at is that the location of the mic is key.

[Read here to learn more about omnidirectional vs. directional and cardioid mics.]

The best earbuds for recording can also have ANR or ANC, but it’s not necessary. It’s nice if you’re rapping down the sidewalk and keeping your cuts, but when a car goes by it’s still winding up in the mix. It won’t even be much quieter. ANR/ANC takes time to kick in and is mostly for ambient, constant noise, like a steady breeze or the noise from a nearby freeway overpass.

ANC also affects the incoming signal -- your vox are going to sound different -- and that’s not even what you want, necessarily.

The Best Earbuds for Recording: MEMS or ECM Microphone

All earbuds have either an ECM or MEMS microphone. MEMS is much better, but it’s not necessarily a deal breaker, depending on what your vocals are like. Even studio monitor earbuds sometimes have ECM to keep the price down, like these MEE buds for 50 bucks. If you really want to learn all about the difference, you can check it out here.

The Best Earbuds for Recording: Wired or Bluetooth

Earbuds come in wired or bluetooth versions. Like we said in our article on the best microphones for recording under 100 dollars⁠, you don’t want a bluetooth mic if you can avoid it. That’s because bluetooth can have a lag which causes your timing to be off. You’ll be listening back to your recording and thinking, “Wow, it’s like I have crappy rhythm. The vocals are off-time.”

What’s worse, they’re not even uniformly off-time, so you can’t just move them a split-second earlier to fix it.

Can it be done? Oh, sure. You’ll need to do shorter takes and probably more of them, but it can work. Just one of the things to take into consideration.

The best earbuds for recording differ from artist to artist. Your best buds might actually be 30 dollars, while some other rapper works best in the triple digits. Doesn’t matter how flashy they are so long as they do the job.

And that’s about it! Let’s go!

The Best Earbuds for Recording: Samsung Level U Collar-Style — $28

This first one looks pretty goofy, right? But check it out: that goofy collar thing hides two directional microphones (not omnidirectional) pointed right at your mouth. That means much clearer recordings of what you do want and far less recording of what you don’t want. The dual mics also have noise reduction applied to them, too, for even clearer takes.

If you happen to have a Samsung phone, it’s compatible with their Samsung Level app for all kinds of cool customization and tricks, too, but that’s just a bonus. Another bonus is that the collar means shorter cords, so the earbuds have very little tugging them out of your ears. That makes them surprisingly comfortable (if you can shake off the feeling that you’re a dog on the end of a leash).

For thirty bucks, you’re doing pretty well, but they are bluetooth so there might be the occasional latency issue. And they look dumb. But if you’re in it for solid recordings in a pair of earbuds, you can do a lot worse.

More goofy collar earbuds, but these are the upscale ones. The Phiatons have everything the Samsung Level U’s do, but they also have the far-superior BT 4 and an optional audio cable for going wired. Remember, wired is where you want to be. And the cords are short like mentioned before.

Reviewers at Amazon say the sound is excellent when you’re listening and the clarity of your voice is great -- which is really what we’re here for. This shouldn’t be surprising because the Phiaton boasts Clear Voice Capture (cVc) technology, so at the very least you can rest easy knowing they’ve specifically worked towards that end.

There are lots of other little bells and whistles, like water resistance and such, but who cares? We’re in it for the microphone.

The best earbuds for recording have to include this wacky pair of earbuds intended for gamers. They have noise cancellation, dual microphones, and they don’t even look too bad.

Oh, and one of those mics is a directional mic on detachable, movable arm with an angled design to pick up sound directly from your mouth!

The other mic is on the cable. It’s got an inline controller with volume and multifunction button for phones which support it (most do), and you get a choice of tips to help them fit your ears.

How could we not include these?

The Best Earbuds for Recording: 1MORE Triple Drivers — $56 at time of writing

The best earbuds for recording include these triple-driver earbuds from the 1More company. Expertly tuned by Grammy award-winning sound engineer Luca Bignardi, they have a Frequency Range of 20-40,000 Hz, which is pretty incredible for true sound fans.

But what about the mic? The mic is one of those MEMS mics mentioned at the start, much better than an ECM, and a built-in chip to identify your phone’s operating system for clear recordings, volume adjustments and skipping tracks while listening. They’ve also put the in-line mic way up on the cord close to your mouth, which honestly all earbuds should do, but mostly don’t.

Another big thing is 1MORE is known for putting your money towards high-quality components, not in crazy branding and markups like other names we could mention…

Oh, and when the author (me) washed his own 1MOREs in his jeans through the dryer and all, he found out the company wasn’t lying when they said they were strong enough to survive that.

There’s a quad-driver option, too, but they’re not worth the price hike. The triples are plenty good enough.

The Best Earbuds for Recording: Yes You Can!

The best earbuds for recording are actually pretty affordable when you look at it. They’re also highly functional for rappers, and if you’re a certain kind of singer, they’d work alright for that, too. Keep in mind, though, you’re always going to be better off with a real mic designed specifically for the job. We’re not saying earbuds are the best option! But if you’re going to make a mobile music studio out of your phone, you should definitely think about the mic, so that’s what we’re about, here.

Thanks for reading, and happy tracking!