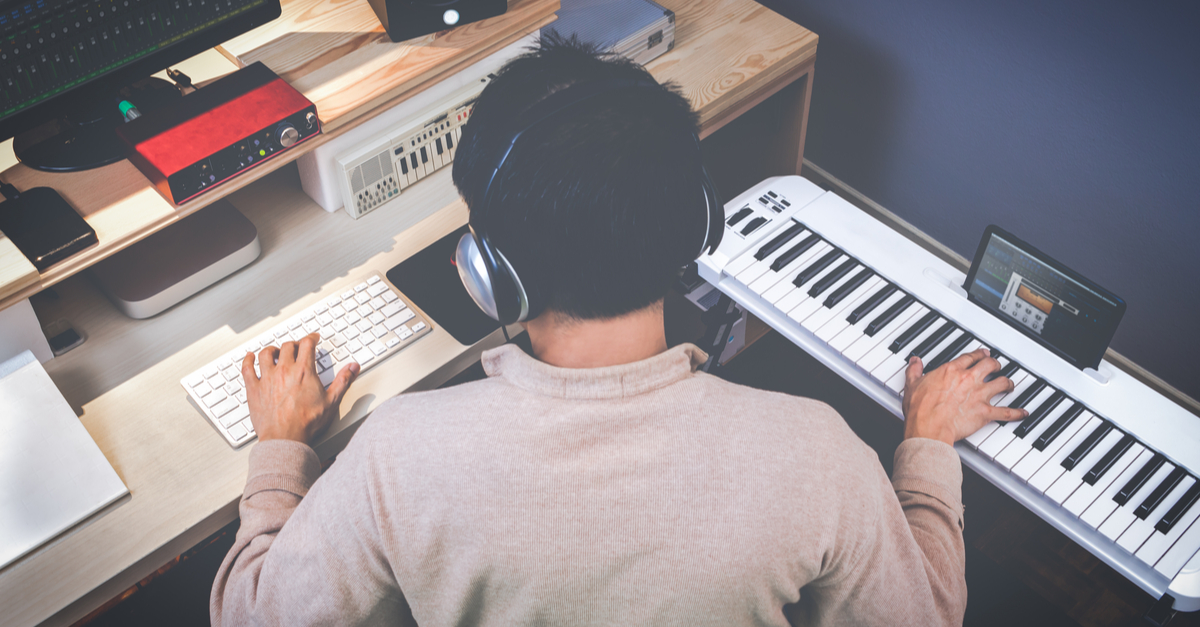 Music streaming is changing music production in ways some music fans may not even notice. Whether you’re a hardcore audiophile or an amateur beat genius trying to make it big, these shifts can make huge differences in your experience.

We’re going to look at the biggest ways music streaming is shaking up music today. After that, stick around for some hints which can help guide your decisions in the studio.

Streaming has allowed everyone and their mother to easily release new music. That’s awesome and we all love it, but now the competition is more fierce than ever.

In fact, 99% of all streams come from the top 10% of artists now. That means that unless you’re already famous and doing great, you’re fighting for that leftover 1% against 90% of everyone else. This doesn’t mean that streaming is not a good avenue to get your music heard.

But in the studio, this means artists need to think much more seriously about what they want their music to be. You can make songs as works of art without thinking of them as a business, but the people making music to sell it may have an easier time getting more listeners.

This doesn’t mean you completely ax all your creativity and who you are as an artist; it just means there’s a happy blend you can find. Once you’ve built up your base, you can get more explorative. The flip side of that is that fans fall in love with a genuine artist who knows who he or she is and what their music stands for. Needless to say, it’s a tricky balance.

If you want a better shot at competing on streaming platforms, you need to steer your studio production towards what will attract large audiences (we’ll talk about how later). And when we say “large audiences,” we’re talking massive, hulking, sky-wide audiences.

So, it really depends on what your goals are with music. Are you looking to make music for the sake of music, or looking to make a living from it? And hey, maybe you don’t have to choose either/or, if you stay in the know about different tactics artists are using to reach similar goals.

Artists Need Millions of Streams Before Making an Income.

Back when artists sold physical albums, artists got much larger percentages of each album they sold. That’s super different from today because when listeners stream a song, they’ve only bought the right to hear it that one time. They don’t own it at all. The amount of money they pay for that right is very, very small.

This is probably going to shock you, but don’t lose hope! There’s a light at the end of this tunnel.

Fortunately, this is partially OK because people listen to more music now than ever before. What your studio production needs to do if you want to make cash by creating music is attract those millions of streams. And that’s totally possible when you’re thinking of what’s most popular during the studio production of your music.

But since fans don’t own the music they stream…

Once again, back when the album was the typical unit of music, it was easy to tell which songs were most popular by how many albums were sold. This guided studio music production because artists could look at the Billboard Top 100 and see what was hot and what was not. There was only one chart. Every recording studio had the latest issue on the couch where artists and engineers could check it.

We can’t look to Billboard for that now, though, because sales charts aren’t very good at measuring the popularity of streamed music. Like we talked about, when you stream a track, you’re just kind-of renting it. That’s why the RIAA made rules saying 150 streams equals the purchase of one single, and 1500 streams is the same as buying a 10-track album.

The problem is, they’re not really the same. When you measure streams as equal to purchased singles or albums, you get extremely popular artists filling up the charts with non-singles. Ed Sheeran’s “÷” (“Divide”) record somehow got all 16 of its tracks onto the singles chart in 2017, so the industry made up new rules, too.

What we have today instead of the old standard, Billboard, is a spread of different charts to choose from. There’s the Official Audio Streaming Chart, BuzzAngle Music charts, third-party charts by companies like Chartmetric, and of course, charts from every streaming company like the ones from Spotify. It doesn’t take much time with these to see they’re very different from one another. It’s almost impossible to direct your studio production based on these numbers.

So we’re still stuck without a chart which helpfully tells us which songs are doing the best. There are new ways we can decide how to direct our music production, though, which is great because now …

Music Production Can Sell Royalties Before They’re Made.

Let’s pretend you were a company making a new kind of shirt. Since the shirt is something solid people can buy and sell, you could sell future profits from those shirts to investors on the stock market. That’s a smart way to make some cash, so you can spend it on ways to make your shirt factory better.

But you’re not making shirts, you’re making songs. For over a hundred years, if you wanted to sell stock in your music, you were out of luck. That’s all different now thanks to music streaming.

Royalty Exchange is a company which allows you to sell portions of your future streaming profits to investors online. They’re making lots of money, and industry heads think they might raise over a billion dollars to invest in artists such as yourself in coming years. How’s that for a new opportunity?

But those shares only sell now if the music production leads to artist streaming. And when we think in terms of studio production, we need to remember that …

The Playlist Is the New Album.

For a long time, people bought albums and listened to them front-to-back. Albums can still speak artistically in ways the single and the playlist can’t, but the popularity of the album is over. If you wanted to focus on one hardcore way music streaming is changing music production, this would be it.

That might sound severe, but the numbers speak for themselves.

So when thinking about changes in music production because of streaming, the very first thing we need to keep in mind is that the album isn’t what’s being listened to, anymore. Not only that, but also …

Songs Are Getting Shorter.

Maybe you’ve noticed that the most popular new tracks seem really short. It’s not your imagination — it’s a fact: songs are getting shorter, and they’re going to keep getting shorter.

This is most true in rap music. Quartzy notes that since 2013, rap songs have gotten almost a full minute shorter on average. That’s almost a third of a song!

If you take a look at this graph:

…and they’ve been getting shorter for about 20 years. No reason to think the trend will stop there. And if you look at this one:

…and they’re doing better than they have in decades. If this doesn’t affect music production, it definitely should.

And it’s not just songs, either. Full-length albums are also getting shorter. This is because music streaming cuts out the need for “filler” songs between the singles. Just like Ed Sheeran’s 16-track string of singles mentioned above, Beyonce’s “Lemonade” also debuted with 12 top-40 singles.

So when you look at how artist streaming is changing music production, the length of your tracks and the albums you put them on should be an issue for sure.

Playlists Are About Moods and Activities, Not Artists and Titles

Not only are song lengths totally different now, but the kinds of songs we listen to are different when we stream them, too. Where we used to listen to a certain album by a certain artist, or maybe a compilation of a bunch of artists in the same genre, now we stream based on the things we’re doing and feeling at the time.

Today’s musician can produce music based on the actual feelings and activities of their audience, not just what they think their audience might be experiencing.

Now that we know all these things, what can we do about them? Plenty. Read on.

Studio Production for Music Streaming Can Work for You.

Obviously music streaming has already changed music production a lot — but what can we do to take advantage of that? Here are the major lessons.

People are listening to shorter songs more often, so why write long songs? Artists wanting larger audiences will want to write shorter tracks. They’ll want the albums they put those tracks on to be shorter, too.

How much shorter? The graph above shows that from 2016 to 2018, the average length of a hit song went from 217 seconds to 212. That’s a difference of five seconds. It makes sense that between 2018 and 2020 songs will drop another five seconds to a total of 207, just under three and a half minutes. When you’re working on your music production, aim for about 3.5 minutes to take advantage of what people are streaming now.

Kanye West: released five albums between 20 and 30 minutes long in 2018. Each has gone platinum.

One of the current trends in songwriting is to start your song with its chorus. This goes against long-standing tradition, but today more artists are doing it on the regular. What did listeners do last year, then? They made their own playlists of songs which start with the chorus, and even included tracks which only sound like they do.

Notice, too, that if you start with your chorus, your song is going to be a little shorter.

Collaborate with Other Artists

Since music streaming favors playlists, the collaboration single has skyrocketed to popularity. It allows for more artists to be on one playlist in the same amount of time, which is part of what made the BBC call 2018 “The Year of Big Music Collaborations” even before Valentine’s Day had come around.

People love to hear artists blending their talents to make something new, so why not give them what they want? It’s great exposure, helps to keep your sound fresh, and collaborators get to trade fan bases. It’s a win/win/win.

The next time you find yourself in the studio, help your music production by inviting a friend or two you can put on the track as a co-writer, or at least a featured artist.

(Note that none of these huge stars really needed to collaborate — they knew they could sell more if they did).

Looking back, the changes to music production made by the music streaming industry have been huge. From shorter songs and albums, to the decline of the traditional album, to collaborations filling up playlists and competition going through the roof, it sometimes looks like nothing has stayed the same.

It’s not true, though. One thing has stayed 100% the same through all of this.

With tenacity, creativity, and a little foresight (gained partially from reading articles like this one) artists can still make success more likely for themselves.

So, go on and write some new hits! But don’t forget you’re in a music-streaming world now when you get to the production.