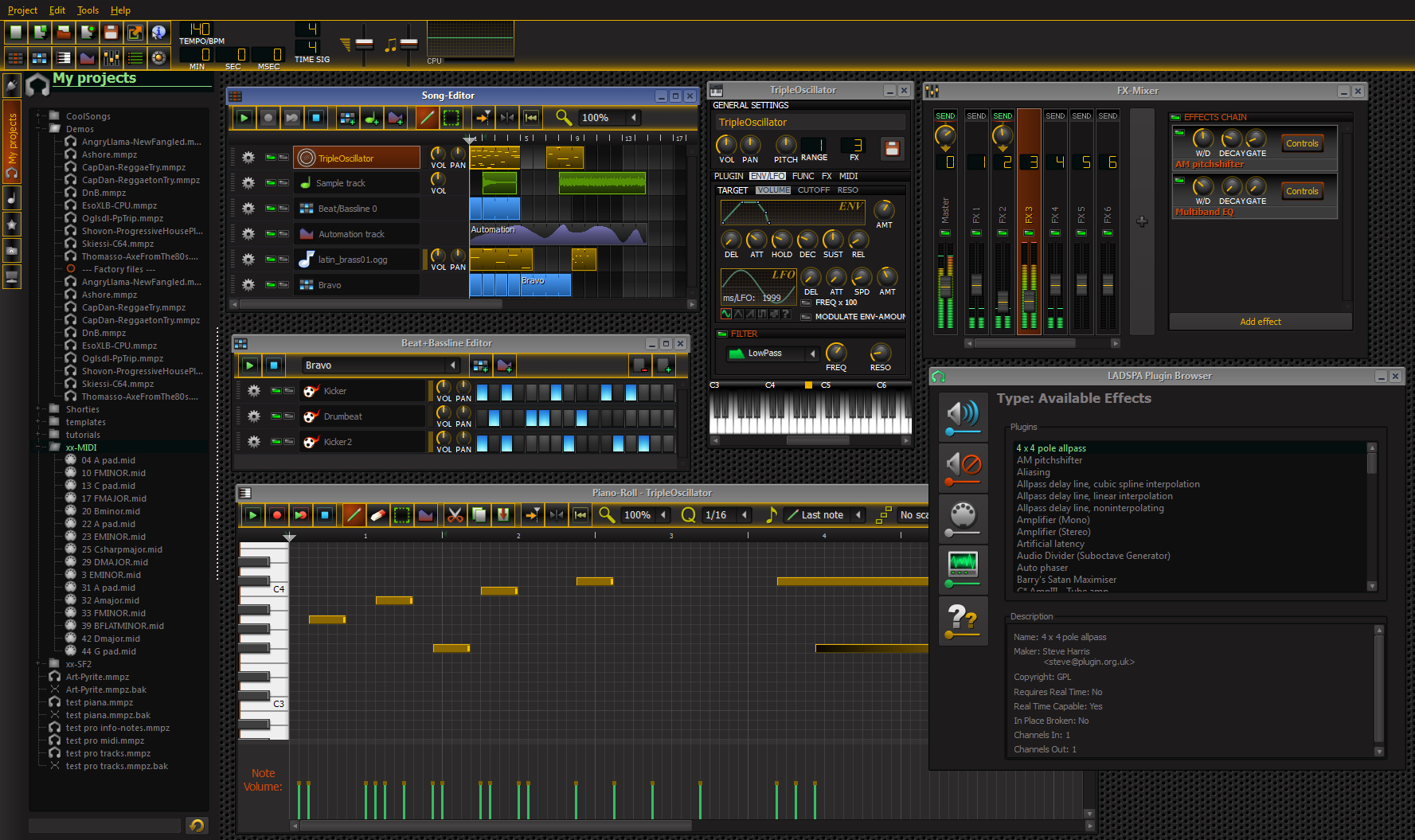 Free beat making software used to be a dream, but today there are a few options. Other lists online will happily mention a "free program for making beats" which is bundled with laptops, like Garage Band or FL Studio, but the fact is these programs are only free until they aren't. Some of them jail powerful features until you pay for an upgrade, while others are totally free during a short trial period.

The free program for making beats we're starting with here, as well as the free beat making software that follows it, is totally free. You don't have to pay for anything. If you're looking to get started on your original EDM or rap music, you could do a lot worse than getting your first free app for making beats here.

So what are we waiting for? Let's go.

Free beat making software might as well start with Waveform. Waveform was called Tracktion 7 until early 2020, but its easy-to-use interface is so much better than Tracktion 6, the company renamed it Waveform to give it a fresh start.

When you want free beat making software, you want something you’ll never have to pay for, but you also want something that can do everything professional software can do, or almost everything. That’s Waveform, alright, but almost to a fault: Waveform has a gadillion features to help you be the best beat doctor you can be, but in the end you're probably only going to use a few of them. The Waveform people totally know this, too.

Waveform Free is unlike any other so called Free DAW – we fully acknowledge it has more capabilities than most enthusiast producers will ever need. There are no restrictions whatsoever – unlimited track count, add popular plugins and enjoy the deeply capable feature set. Once addicted we have a perfect selection of deep dive tools available in Waveform Pro to take you to the next level. Go produce!!

There's a reason we started with this particular free app for making beats. If you start with this one, you might not even bother trying the others. (But we think it's a great idea that you do. Besides, they're free! So why not?).

A free app for making beats? Try Studio One 4 Prime. It’s available on Win and Mac, but only on 64-bit systems. The image makes it look complicated, but that's just a picture PreSonus supplied to show off all Studio One 4 Prime's bells and whistles. As a beat doctor, you won't be using 98% of that stuff. If you get good at it, though, you might find yourself branching out into melody lines, harmonies, bass lines ... the sky's the limit, really.

Studio One 4 Prime includes a set of nine high-quality effects (channel strip, distortion, delay, phaser, etc.) and comes with over 1 GB of sample and loop content to help new users get started. If that’s not enough and you absolutely need VST plugin support, check out the Artist (separately paid add-on required for VST/AU plugin and Rewire Support) and Pro versions of Studio One or consider some of the popular freeware options like SONAR Platinum or Tracktion 6. Please note that Studio One 4 Prime is only compatible with 64-bit operating systems. - PreSonus

No VST or AU plugins allowed on the free version, but it comes with all kinds of effects already. It's noob-friendly, and it's more than enough to get you started. If you're only mixing beats, this is an absolutely fine place to start.

A free app for making beats has to include this beautiful project, too, the Linux Multimedia Studio, or LMMS. You can get it for Win, Mac, or Linux (ofc) and it's super-duper powerful on all three platforms. This free beat making software is the one we use because its from the good people at Linux, which means it's rock-solid and will never cost a dime. You can always find great tutorials on LMMS and all Linux programs at YouTube, too, so there's that.

Also, perhaps the coolest thing about LMMS, you can set your keyboard to work as a MIDI controller, so you don't even need a synthesizer with piano keys on it!

The LMMS devs describe their program as "a sound generation system, synthesizer, beat/bassline editor and MIDI control system which can power an entire home studio."

Sounds and tones can be generated, played and artfully arranged to create entire tracks easily, giving you the opportunity to create music from beginning to end. The tools to create the sounds, arrange the sounds and rhythms to create tracks, layer the tracks to create songs, and then save the songs to an output format are all there, ready for you to use. LMMS can also connect to your MIDI keyboard, allowing you to play music live. - LMMS

You can compare LMMS to Garage Band, FL Studio, Logic Studio, or Beat Machine Pro and find that it does pretty much everything those programs do.

Free beat making apps are all over the place, as we've shown. But some are better for you than others, depending on what you're looking for, and some aren't really free at all. With this hand list in your pocket, you shouldn't have a hard time getting your beats down in a few minutes. Probably, though, you'll be having so much fun you'll want to keep at it all the time! And that's what it's all about, right? Well, that, and the music, of course. Happy drumming!